Salutations young reader! Today we are going to embark on a journey back to the age of the dinosaurs. The dinosaurs are some of the most incredible animals that ever lived on our planet. They lived nearly 200 million years ago and thrived for about 165 million years. We humans have only been around for about 60,000 years and we have only been using computers for about 75 years. The dinosaurs mysteriously became extinct and disappeared from our earth, but left their fossilized remains behind. Dinosaur fossils have been constantly discovered in human history; the Chinese thought they were dragon bones and Europeans thought they were the bones of biblical monsters. Luckily, the scientific study of dinosaurs began in between 1815-1824 with the discovery of an Iguanodon fossil. Since then dinosaurs have been discovered all over the world. Their immense size, strange shapes, and wonderful natures make them inherently worthy of interest. The study of dinosaurs requires depth of imagination, analytical skills, and thought. The many unanswered questions about their lives, behavior, and disappearance provoke the curious to seek answers and ask even more questions. I hope this book fuels your imagination and makes you want to learn even more about dinosaurs. I hope you learn to appreciate the value of the dinosaurs and that you bring a spirit of openness and wonder on your journey back to the age of the dinosaurs.

We know what we know about the dinosaurs from a variety of sources including fossils, biology, and other scientific disciplines. Fossils are the ancient remains of the dinosaurs, the most familiar being their bones. Biological science is the study of life in general, but many scientists compare the dinosaurs to modern day animals to support their theories.

In this book we are going to talk about the Troodon. The Troodon was one of the first dinosaurs discovered in the United States. It is interesting because it is one of the smartest dinosaurs that ever lived. We will not only talk about scientists figured out it was intelligent, but also about its probable behavior and relationship with its environment.

Before a talk about dinosaurs can take place it is important that we discuss the theory of evolution. Evolutionary theory supposes that all the animals we know and see today are the direct descendants of animals that existed millions of years ago. The dinosaurs and other creatures that existed millions of years ago either died out or gradually changed into different animals. For instance, birds are considered to be surviving dinosaurs because their dinosaur ancestors survived the dinosaur extinction event (we will discuss this later). The Troodon is considered by scientists to be a direct ancestor or very close relative to modern birds.

Remember that any time you see an * next to the name of a dinosaur, it means that a book has been written about this dinosaur in the Dinosaur Books for Young Readers series. Any word written in bold is an important scientific term which is defined in-text. Italics are used to denote the first time a dinosaur’s name is mentioned in the book. 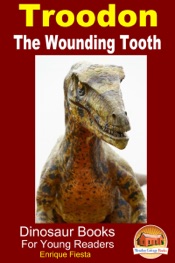