If your fondest TV memories involve the POWs of Stalag 13 cleverly outwitting their captors, Schultz stammering "I know nothing!" and Hochstetter threatening to send everyone to the Russian front, then this is the book for you. This fun and informative book takes you behind the scenes of the classic 1960s sitcom to reveal:

· the story behind the creation, production, and eventual cancellation of the series
· the controversy surrounding the show's unlikely premise
· interviews with many of the show's stars and crew
· biographies of the stars and supporting actors
· a detailed guide to each of the 168 episodes
· a guide to collecting Hogan's memorabilia
· and more...

Hogan's Heroes is more popular now than ever before, especially in Germany, where it has become a surprising cult hit. In this book, most of the show's stars and behind-the-scenes personnel share their memories and reflect on the series' enduring popularity. 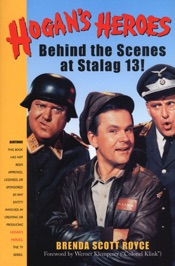