When Bernard de Fontenelle (1657-1757) published the first edition of his Entretiens sur la Pluralité des Mondes in 1686, it was an immediate success. In an age when women, even those from the richest and most distinguished families, received little or no formal education, it offered an entertaining and accessible introduction to astronomy and some of the burning topics of the day. Does the earth really go around the sun? Are there other inhabited planets out there? If so, are the inhabitants like us or quite different? Is the moon itself inhabited? Is even the sun inhabited? Are there volcanoes on the moon? How hot is Mercury? How long is a Venusian day? Will flying machines one day take us to the moon?
The chapters are structured as six conversations between Fontenelle and the Marchioness of G--- during evening strolls in the Marchioness's garden, and they are enlivened by wit, charm and more than a little flirtatiousness.
While providing new notes, some illustrations and an introduction, this new Tiger of the Stripe edition is based on the 1808 edition of Elizabeth Gunning's translation, retaining the charm which was so essential for the book's success. Miss Gunning, a beautiful and talented novelist with a rather racy personal life, drew on an annotated French edition by the distinguished French astronomer, Jérôme de Lalande. This edition thus offers an interesting accretion of ideas, ranging from Fontenelle's 1686 edition and later revisions, Lalande's, sometimes rather critical, comments, Gunning's appropriately flowery translation, and our own explanations for the modern reader. It is, without doubt, a little gem. 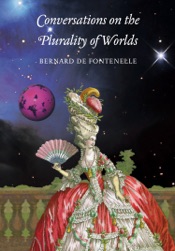