When danger and passions flare it’s best to find cover…

Cade Davies is a former Special Forces soldier who is now a high school teacher and football coach. And something is trying to kill his players. He’s been too busy trying to keep his players alive, while also avoiding the Davies Brothers marriage trap set by half the town, to pay attention and to the fiery redhead who has swept into his small town.

DEA Agent Annie Blake was undercover to bust a drug ring that preys on high school athletes in the adorable, small town of Keeneston. She had thought to keep her head down and listen to the local gossip to find the maker of this deadly drug. What Annie didn’t count on was becoming the local gossip. With marriage bets being placed and an entire town aiming to win the pot, Annie looks to Cade for help in bringing down the drug ring before another kid is killed. What she didn’t intend on was becoming the next target.

This <b>iBooks Edition</b> contains: the BONUS Chapter 25 for Annie and Cade’s wedding day. 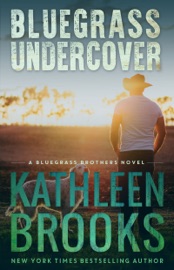