The story of the Warsaw Ghetto told through twenty-eight never-before-published accounts-a precious and historic find.

In the history of the Holocaust, the Warsaw Ghetto stands as the enduring symbol of Jewish suffering and heroism. This collective memoir-a mosaic of individual diaries, journals, and accounts-follows the fate of the Warsaw Jews from the first bombardments of the Polish capital to the razing of the Jewish district. The life of the ghetto appears here in striking detail: the frantic exchange of apartments as the walls first go up; the daily battle against starvation and disease; the moral ambiguities confronting Jewish bureaucracies under Nazi rule; the ingenuity of smugglers; and the acts of resistance.

Written inside the ghetto or in hiding outside its walls, these extraordinary testimonies preserve voices otherwise consigned to oblivion: a woman doctor whose four-year-old son is deemed a threat to the hideout; a painter determined to complete his mural of Job and his trials; a ten-year-old girl barely eluding blackmailers on the Aryan side of the city. Stunning in their immediacy, the urgent accounts recorded here provide much more than invaluable historical detail: they challenge us to imagine the unimaginable. 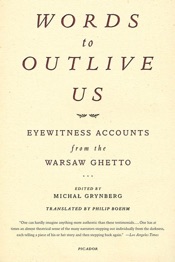