In London for graduate school, Val knows she's finally free. Her father and ex- almost-boyfriend are back in California and she's out of the vampire hunting biz for good. Or is she?

She draws the attention of Lucas, a 1600 year old vampire, and King to his kind. He’s also wicked hot. As golden as Lucifer, and just as tempting, he makes Valerie an offer she can't refuse: help him find out if the Others (Empaths, Fey and Werewolves) still exist or he'll stop protecting those she loves.

Lucas tells her that Empaths were a vampire’s biggest weakness before going extinct hundreds of years ago. While the Fey or a Werewolf might kill a vampire, an Empath could enslave them, seducing or harming them with emotions.

The one detail he leaves out? Valerie is an Empath. And after 1600 years of an emotionless existence, Lucas is drawn to Val like a recovering alcoholic to a wine cooler.

Can she keep those she loves alive, stop Lucas from munching on her, survive a fanged revolution and still find a way to have that boring, normal life she’s always wanted? Probably not, but boy is she gonna try. 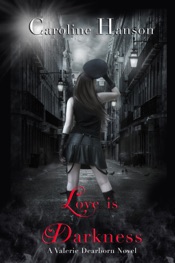