HOLLYWOOD "B" MOVIES: A Treasury of Spills, Chills and Thrills, focuses on the support features Hollywood produced in that golden era when cinemagoers demanded value for their admittance money. The 250 movies detailed in this book are truly representative of Hollywood's golden age. Hollywood doesn't make movies like this any more (not deliberately anyway) but for the classic film fan, the "B" movie provides a fascinating subject. So what exactly is a "B" movie, and how does it differ from an "A"? Many people today would reply, "A matter of budget!" And that is certainly true to a certain extent. Moviegoers of the time, however, were not nearly as aware of budgets as we are now. For the average moviegoer of previous decades, a "B" movie was simply any movie that a theater advertised in small letters as a "plus" to the main feature. Generally, the support attraction played before Interval, so that patrons would not feel too unhappy if they arrived late and missed the first ten or twenty minutes. Therefore, in the minds of many moviegoers, the "B" was a movie of no extra special entertainment value. To a cinema manager, however, a "B" was any film at all with a running time of less than 70 (or 75) minutes. This short running time meant that the movie could not stand alone, even as a main attraction, because such was the competition between two or three or four cinemas in every neighborhood that yesteryear's patrons demanded the whole show run not less than 3 hours. The distributor (or "film exchange"), however, applied yet another definition. To the exchange, a "B" meant any feature with an entertainment quotient so low it had to be sold to exhibitors at the lowest flat rate possible. This book extensively covers all three of these categories. Of course, patrons did have their favorites. Mysteries were overwhelmingly popular, especially series movies like Sherlock Holmes, Charlie Chan, Edgar Wallace and Torchy Blane. Westerns and slapstick comedies were also strongly favored in blue-collar neighborhoods, as were the series pictures of Blondie and Maisie. Of course, it sometimes turned out that patrons regarded the "B" feature as more entertaining than the extensively touted "A" attraction, particularly if it was actually an "A" in disguise (a film the exchange had decided to offload at bargain basement rentals). You're in the Navy Now (Gary Cooper), Zaza (Claudette Colbert), Zero Hour! (Dana Andrews, Linda Darnell, Sterling Hayden), The Young Stranger (James MacArthur, Kim Hunter), Without Honor (Laraine Day), The Wistful Widow of Wagon Gap (Abbott and Costello), Whistling in Brooklyn (Red Skelton), What Next, Corporal Hargrove? (Robert Walker), Western Union (Randolph Scott), Tropic Zone (Ronald Reagan, Rhonda Fleming), Trooper Hook (Joel McCrea, Barbara Stanwyck), That Certain Woman (Bette Davis, Henry Fonda), and Texas Carnival (Esther Williams, Howard Keel, Ann Miller), were just some of many films offloaded by distributors, as detailed in the book. In many cases, the bargain price reflected neither the movie's extensive budget nor its entertainment value. With both Scaramouche (Stewart Granger, Eleanor Parker, Janet Leigh, Mel Ferrer) and The Doughgirls (Ann Sheridan, Alexis Smith, Jane Wyman) for instance, it was the title itself that held no appeal to patrons or exhibitors; Way Out West (Laurel and Hardy) was disadvantaged by its short running time; White Tie and Tails (one of the best "B" movies ever made) by the studio's decision to cast perennial heavy Dan Duryea as the hero. Romance in Manhattan, a Ginger Rogers vehicle, was also saddled with an unpopular lead (Francis Lederer); a movie titled Abilene Town appealed to Texans but was a dead loss in Vermont; and those little gems, Death on the Diamond (Robert Young), Kind Lady (Ethel Barrymore), and Kid Glove Killer (Van Heflin, Marsha Hunt) were simply undone by the mere fact that they were products of MGM's "B" unit. 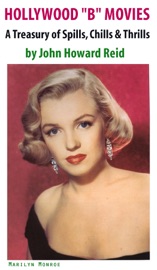