Butch Harmon is the world’s number one golf coach. He taught Tiger Woods through one of the greatest stretches of victories in golf history (and, perhaps even more conspicuously, did not teach Tiger Woods following his unprecedented run), as well as superstars like Greg Norman, Adam Scott, Fred Couples, Darren Clarke, Natalie Gulbis, and Davis Love III. How did he become such a legendary teacher and mentor? The answer is simple: He learned from watching his father.

The Harmons are the First Family of golf, and Claude Harmon, Sr., was the greatest of them all. His skill as a player, an innovator, a teacher, a devoted father, a loyal friend, and a peer of giants such as Ben Hogan has gone largely unappreciated by all but those who knew him best. In this book by his son, he finally gets his due. In The Pro, Butch Harmon paints a compelling portrait of an era in sports before the emergence of big media and bigger money, and shows how the lessons he learned about life and golf at his father’s knee made him the man he is today.

The Pro is both a family and a golf memoir, as well as an inside look at what it takes to teach the Tigers of the world. It describes how Butch and his brothers, who are also teachers, transfer their father’s unique wit, wisdom, and philosophy to the next generation of golfers. Sometimes their advice relates to the game, sometimes they simply offer words of encouragement and motivation, sometimes they make pointed criticisms intended to shock their students into focus, and sometimes they try to impart simple advice about “walking around through life.” The Harmon brothers are teachers who share a special quality: All of their lessons are passed down from their father.

Millions of golf fans know Butch Harmon; many are even familiar with his father and brothers. But never before have we been given such an intimate look at life among the legends of golf. The Pro is the story of an extraordinary father and son that will resonate with anyone who has ever looked back on life and recognized the wisdom of their parents’ teachings.

"Golf's hard," Dad would say, pointing a meaty finger at me as if he were about to reveal the secret of the Rosetta Stone. “Good golf is damn hard, and championship golf is something only a few will ever see. But that’s how it should be. If it were easy, everybody would do it. And where’s the fun in that?”

From Butch Harmon, the world’s number one golf coach, comes the inside story of how he learned everything he knows about golf and life from his father, Claude Harmon, Sr. Both a family memoir and a reminiscence of growing up among the legends of sport, The Pro is a portrait of one extraordinary family and the game that will carry their legacy for years to come. 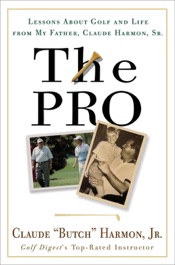 Free read eBooks online from The Pro. Review The Pro for free and without need to Registration. Read The Pro PDF/e-Pub/kindle fire on your devices without any apps or contracts.