The updated guide to differences - and similarities - of faiths around the world.

In this revised and updated edition of the popular guide to the many faiths followed around the world, modern and ancient religions are extensively covered as well as New Thought religions. This edition also now features a chapter on Sikhism, more coverage of religious extremism in the 21st century, a new chapter on the afterlife, and additional online resources making it the most up-to-date volume available.

? Outdoes the competition with more chapters on current and ancient religions

? Appeals to students, theologists, and those generally interesting in religions around the world. 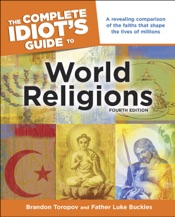