In the aftermath of a crisis that threatens the safety of all shadow children -- illegal third-borns in a society that allows only two children per family -- Trey's friends expect him to take charge -- a function he doesn't want or think he can do.

Trey's new role leads him to travel with Luke Garner's brother, Mark, to Population Police headquarters. There he impersonates an officer to try to rescue Luke, who has been taken prisoner. The nonstop adventure puts all three boys in danger and risks exposing the underground movement to help all shadow children.

In this, the fifth book in the Shadow Children series, Margaret Peterson Haddix returns to the futuristic setting and compelling characters she created in Among the Hidden. With an adrenaline-fueled plot and surprising twists, Haddix has again crafted a story that is suspenseful until the last page. 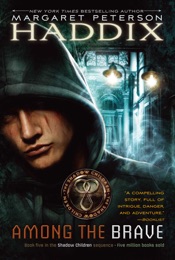