This Box Set contains books 5-8 in The Silencer Series, including:

After six months away in Detroit, Recker and Jones return their operation to Philadelphia. They're almost immediately thrown into trying to prevent a cop killing. They also come back to find things aren't quite the way they left them. One of the city's crime leaders tries to force Recker's hand, by using Mia as bait, in helping them take control of the city. Despite getting the cold shoulder from Mia initially upon his return, Recker works hard at freeing her from danger, taking her to the only place he knows she'll be safe. It leads to a violent conclusion, one that finds Recker working with the police by his side.

​Recker and Jones go hunting to add a third member to the team. After an exhaustive search, Jones has finally found the perfect candidate. Former CIA Operative Chris Haley has been out of the game for a couple of years, but jumps at the chance to jump back into things as the new Silencer.

As Recker and Haley start settling in with their new work dynamic, things don't go as smoothly as they have in the past. They get into a rough situation that leads to Recker getting put in handcuffs and taken away in a police car. Can Jones engineer Recker's release? Or will they once again become a two man team with only Jones and Haley?

Somebody is shooting police officers. After several killings, and no progress on finding the shooter by the police department, Recker is asked to lend a hand. One of Vincent's men inside the department, a homicide detective, reaches out to The Silencer, setting up a meeting through Vincent. As Recker, Haley, and Jones investigate the killings, they start to find more questions than answers, and realize that everything is not as cut and dried as it seems.

Once the supposed killer is finally found, Recker thinks he may have been played. He's not so sure that it wasn't a plant and the man was framed. All of which leads him to question, if it's someone else behind the shootings, who has the power and motivation to pull it off? And why?

There's a new criminal element in town and they state their arrival by knocking off a few of Vincent's men. Recker and the team get drawn into the middle of it and start investigating to learn the identity of the mystery player. Recker and Haley get a tip about a high-level meeting of the new crew in an abandoned building, but all is not what it seems. Instead of a meeting, they run into Malloy, who's also there to investigate, and an otherwise empty building. It turns out to be an ambush, and only two of the three will escape uninjured.

Will they find out who's responsible for the attack and bring them to their brand of justice? Or will the perpetrators slip out from under their fingers to cause more chaos and destruction? 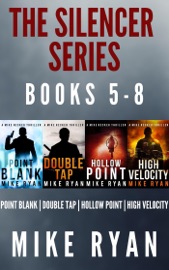