Captain Siobhan Dunmoore no longer enjoys the freedom to fight the Shrehari Empire on her own terms aboard the Q-ship Iolanthe.  Special Operations Command has assigned her to Task Force Luckner, whose mission is replicating Iolanthe's success on a larger scale.  Unfortunately, neither her new superior, Rear Admiral Kell Petras, nor any other captain in the task force understands successful commerce raiding requires a different mindset.  Instead of sheepdogs, they must become wolves in sheep's clothing, and Dunmoore is just the right officer to teach them.  Yet Petras and his flag captain are not interested.

But when an unauthorized raid on a Shrehari forward operations base produces surprising results, Dunmoore triggers a cascade of events which could forever change the course of the war.  As the old saying goes, fortune favors the bold.  Will Dunmoore prove once again that she and Iolanthe's crew are the most daring of them all? 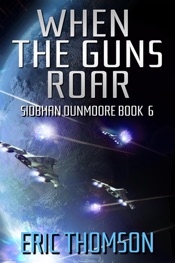