An essay collection from “the Henry Miller of food writing” and New York Times–bestselling author of The Raw and the Cooked (The Wall Street Journal).

Jim Harrison was beloved for his untamed prose and larger-than-life appetite. Collecting many of his most entertaining and inspired food pieces for the first time, A Really Big Lunch “brings him roaring to the page again in all his unapologetic immoderacy, with spicy bon mots and salty language augmented by family photographs” (NPR).

From the titular New Yorker article about a French lunch that went to thirty-seven courses, to essays on the relationship between hunter and prey, or the obscure language of wine reviews, A Really Big Lunch is shot through with Harrison’s aperçus and delight in the pleasures of the senses. Between the lines the pieces give glimpses of Harrison’s life over the last three decades.

Including articles that first appeared in Brick, Playboy, Kermit Lynch Wine Merchant, and more, as well as an introduction by Mario Batali, A Really Big Lunch offers “sage and succulent essays” for the literary gourmand (Shelf Awareness, starred review). 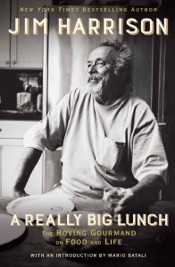