"A vital, understated contribution to the body of Holocaust literature."-Kirkus Reviews

How many Jewish women do you know who moved back to post-war Germany?

In this collection of survivor stories, you'll meet 16. Each of these women recounts her life story with grace and courage, even as they remember horrors of the holocaust. Stories of fleeing war and living as a refugee, of deep personal loss and of German repatriation. Some were young and fled with family, some were older and escaped on their own. They all had to start fresh somewhere, with a new language, a new environment and new people. Some had difficulty adapting to their new homes, others grew to feel at home.

Where did they go? How did they live? And what drove them back?

Stories of survival with the power to uplift!

Click “look inside” above the book’s image at the top left side of the page.

Ruth Galinski was forced to leave Germany for Poland in 1938. She learned the language, got married and ended up in the Warsaw Ghetto. When her husband didn’t return home one day, she feared the worst and fled to the Tatras with a small resistance group. After the war, she ended up back in Germany for what she thought would be a short time. Then, she met her second husband, a man famous for rebuilding the Jewish community in Berlin.

Steffi Wittenberg first fled to Uruguay with her family when she was 14. There she learned Spanish and English, along with office skills that earned her a living as a foreign language secretary. She married a German Jew, who had also fled to Uruguay, and had family in Houston, Texas. They went to Houston to work for his cousin but ended up fighting with union workers and against racism. They were harassed during the McCarthy Hearings and felt like there was nowhere else to go but to East Germany. They were rejected as potential American spies!

Eva Fröhlich had to leave everything behind. She went with her family to Uruguay, where she improved her Spanish skills while helping her mother earn money by making embroidered dresses. She met her future husband while visiting a cousin in Brazil. She spent decades there giving private English lessons while her husband sold this and that. After their retirement, he wanted to return to Germany, where many of his friends had gone, but she didn’t want to.

Perhaps not surprising, family underscores the reason each went back. Many biographies about holocaust survivors are displays of bravery and triumph of the human spirit. Beneath the surface of these diary-like entries, we discover a compelling survival guide. And we find illuminating perspectives on Jewish history and Jewish identity.

Their childhoods were spent in Berlin or Stettin, in Framersheim or Frankfurt. Happy and sheltered and believing that it would always be that way. Until, as Jews—something they weren’t even conscious of up to this point, and even if they were, then certainly not of the stigma that came with it—they were excluded. It was insidious in the beginning, but then it because more and more brutal. First it was a girlfriend who would look away without a word. Then the schools, which remained closed to them. Finally, they descended into poverty, because their fathers lost their jobs. And then the all-pervasive threat, the fear of being arrested. In the end, only fear of the unknown remained as they were deported, forced underground or were able to emigrate just in time.

So why this difficult step back to a place that could never again be home after the Holocaust? 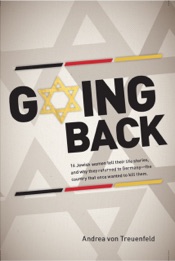 Comments
Free read eBooks online from Going Back. Review Going Back for free and without need to Registration. Read Going Back PDF/e-Pub/kindle fire on your devices without any apps or contracts.