Hitler boasted that The Third Reich would last a thousand years. It lasted only 12. But those 12 years contained some of the most catastrophic events Western civilization has ever known. In The Rise and Fall of the Third Reich, William L. Shirer gave us the definitive book on Hitler's German Empire. Based on his personal experiences as a war correspondent as well as the voluminous documents that came out of Germany after the war, this thrilling account of Hitler's reign is widely acclaimed to be one of the greatest historical works of our time. Now available as an exclusive anniversary edition, this volume is as compelling as ever. Everything about the period is explained to the fullest, beginning with Hitler's rise to power, the Nazification of Germany and the march to war. The accounts of how the United States got involved and how Hitler used Mussolini and Japan are astonishing, and the coverage of the war-from Germany's early successes to her eventual defeat-is must reading 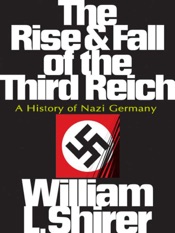