Magic. Betrayal. Dragons. The epic coming of age adventure continues, but this time the stakes are higher than ever.
New York Times bestselling author K.N. Lee brings you all this and more in the sequel to the #1 international bestseller, "Half-Blood Dragon."

Rowen is on the run. Convicted of a murder she didn't commit, a last-minute surprise rescue from the gallows by the notorious pirate Elian Westin should have brought her a measure of freedom, if not peace. Instead, Rowen has more enemies than ever...and more questions.

The royal navy of Withrae is on her heels to bring her to justice, and her erstwhile savior Captain Westin wants her back because he believes she is the key to finding the legendary Red Dragon, a creature so powerful that it can change the course of time.

Hunted by dragon shifters who despise her and feared by humans who don't understand her, half-blood dragon Rowen must unravel old mysteries in order to outsmart new adversaries. She can only hope that her new, uncontrollable magical abilities don't get her killed before she can confront the man who set all of this in motion...

...a man who hates her but will do anything to save her life.

Download your copy of this epic, swords and sorcery adventure.
Reading Order:
Half-Blood Dragon
Magic-Born Dragon
Queen of the Dragons 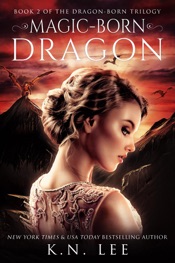