*Updated to include new section on the Green New Deal!*

"The climate scare ends with this book."  —SEAN HANNITY

"This book arms every citizen with a comprehensive dossier on just how science, economics, and politics have been distorted and corrupted in the name of saving the planet." —MARK LEVIN

Make no mistake: those are the surefire consequences of the modern global warming campaign waged by political and cultural elites, who have long ago abandoned fact-based science for dramatic fearmongering in order to push increased central planning.

The Politically Incorrect Guide to Climate Change gives a voice -- backed by statistics, real-life stories, and incontrovertible evidence -- to the millions of "deplorable" Americans skeptical about the multibillion dollar "climate change" complex, whose claims have time and time again been proven wrong. 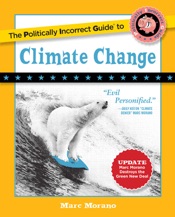