We are an unconscious consciousness, the product of an artificial and simulated creation, and therefore virtual, in a binary universe, represented mathematically in a hologram.

We can say that our reality in itself can be in these states-superimposed-that we will never get to know or understand, in such a way that our world of virtual experience is only our human world, but not the world itself.

As computer science advances by leaps and bounds, we learn more about what computers can tell us about how our life works and closer to creating the first artificial intelligence machine that fits our description of life and more. It endangers again the image we have of ourselves and this will happen sooner or later.

Today we are not able to understand a congruent vision of the universe, as Stephen Hawking or Roger Penrose can describe it, to mention two great scientists.

That is why in this book we have exposed philosophical ideas from Platon where he said "What we see may not be real, but a projection of something else" or scientific ideas where Albert Einstein said that "Reality is nothing other than the ability that has to deceive our senses ".

Therefore, in this book the latest scientific results are published, such as the research of Dr. Nick Bostrom, from the University of Oxford, where he assures that most human beings do not realize that their life and their world are mere illusions.

Nasa scientists like Dr. Rich Terrile, where he says "that in quantum mechanics, particles do not have a defined state unless they are being observed. Many theorists have spent a lot of time trying to figure out how this is explained. One explanation is that we are living in a simulation. "

That is why we are an Unconscious Consciousness since with our thoughts through the senses are those that create our virtual and simulated universe, so that our reality is only our imagination. 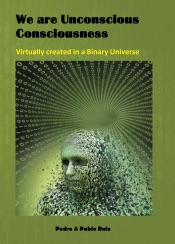