This edition of the Testament of Solomon is a complete and accurate reprint of the original translation of ancient manuscripts by F.C. Conybeare first printed in 1898. It contains all Conybeare’s original notes and commentary, including the Greek characters he footnoted for the reader’s consideration. Beware of other editions of this work that do not contain all the original text.

The Testament of Solomon is a pseudepigraphical work attributed to King Solomon the Wise of the Old Testament. Written in the first-person narrative, the book tells the story of the creation of the magical ring of King Solomon and how Solomon’s ring was used to bind and control demons, including Beelzebub. In this book of King Solomon, the discourses between the King and the various spirits are told, and the story shows how Solomon uses his wisdom to withstand the demons’ tricks and guile and enlist their aid in the building of his temple. The spells and seals of Solomon used by the King to bind the spirits are detailed, which makes this work a book of Solomon’s magic, similar in nature to the Lesser Key of Solomon the King and the Greater Key of Solomon the King, which both are King Solomon books of magic and contain various talismans of Solomon, including the secret seal of Solomon.

The manuscripts from which this work was discovered date from the 15th, 16th, and 17th centuries. All were written in Greek. This dating makes most experts believe that the work is medieval. But some scholars, including D.C. Duling, argue that it is likely that the work comes from the 5th or 6th centuries. The various manuscripts used to source the work all date to medieval times, but the text itself, as well as references to other works, indicate the Testament is much older.

For example, in the Dialogue of Timothy and Aquila, there is a direct reference to the Testament of Solomon. The Dialogue purports to have been written during the Archbishopric of Cyril in 444 C.E., and therefore, its reference would date the Testament before that time. Similarly, in the early 4th century Gnostic text On the Origin of the World, references to the book of Solomon and his 49 demons are made.

No matter the date, the text provides an immensely interesting description of how King Solomon tamed various demons to build his temple. The text includes predictions of the coming of Christ, as one demon explains to Solomon that while he may be bound, the only thing that can truly take his power away is the man born from a virgin who will be crucified by the Jews. 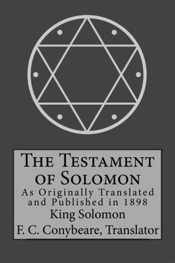