No tsar of Russia has been more widely known by name than Ivan the Terrible. He has exercised a sinister fascination but remained a nebulous figure, seen through a haze of blood and savagery.

In truth, Ivan was extraordinarily complex, extreme in conduct and in speech. His personality was vivid and powerful. He inspired legends and passionate conflicts. But from earliest childhood, he suffered terrors, calamities, and personal tragedies that would have unhinged most people. Fear, betrayals, and desperation made him suspicious and liable to flashing storms of anger, and his punishments were harsh. Indeed, he revealed many of the symptoms of a manic-depressive. His sense of sin, his obsessive anxiety for his dynasty, and his bouts of inhumanity brought him close to insanity.

But he was also capable of affection, kindness, generosity, and tolerance, and where the affairs of the Tsardom were concerned, he remained always the practical and dedicated sovereign.

An imperious man of great intelligence and ability, Ivan was a natural leader, and as the first crowned tsar of Russia, he claimed the loyalty and devotion of his people who saw in him the center and epitome of the nation. Here, from New York Times bestselling historian Ian Grey, is Ivan's extraordinary story. 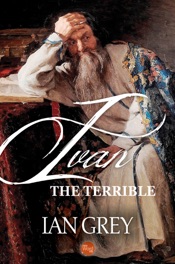