"The Seventeenth Path is the Disposing Intelligence, which provides Faith to the Righteous, and they are clothed with the Holy Spirit by it, and it is called the Foundation of Excellence in the state of higher things".

The Sepher Yetzirah is the oldest and most mysterious of all Kabbalistic texts. Its exact origins are unknown, and hotly debated. Some scholars believe it might have an early Medieval origin, while others emphasize earlier traditions appearing in the book.

When properly understood, Sepher Yetzirah becomes the instruction manual for a very special type of meditation meant to strengthen concentration and to aid the development of telekinetic and telepathic powers.

Also included are digital editions of two landmark Kabbalah works from 1913, Jewish Mysticism by J. Abelson and The Cabala, Its Influence on Judaism and Christianity by Bernhard Pick. There is also an image gallery showcasing Kabbalah art and symbolism. 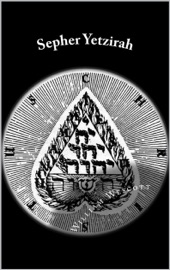