The apocolytic duology, In The End, now together in one volume.

Welcome to the end of the world.

We thought we were alone in the universe. Turns out we were wrong.
Dead wrong.
When alien ships land it's all anyone can talk about. But for a year, nothing happens and the world starts to believe it's just an elaborate prank.
Until they finally emerge from their space crafts.
And that's when I saw him. Jace'el, son of Thral'el, leader of the Others. I don't know if I can trust him, but I do know I can't stay away even if I wanted to.
They came offering world peace, and everything was perfect… right up until people started getting sick. Now a virus is running rampant through every city in the world, decimating the entire human population as well as the Others.
And that's when the runners first appear. Humans and Others alike, ravaged by the disease and turned into flesh-eating monsters.
The worst part? There is no cure.
I am Raylinn Marrow, and this is the beginning of the end.

For fans of The 100, Star Crossed, and The 5th Wave, this heart pounding, must read YA, dystopian, romance is one you don't want to miss!

This book is a Romeo and Juliet retelling and contains insta-love, aliens, a virus, and zombies. 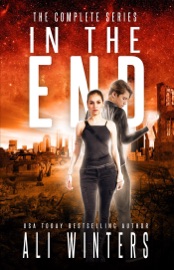